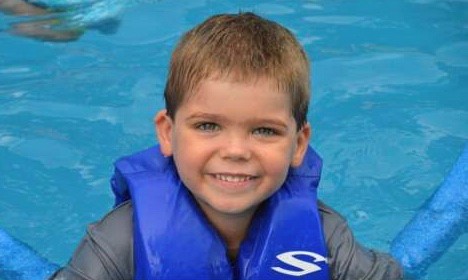 Riley Osmon, who is now nine, has been fighting Pre-B Acute Lymphoblastic Leukemia since June of 2013 when he was just 22 months old.  Riley completed three years of high risk treatment at Riley Children’s Hospital, but on his very last scheduled clinic appointment in September of 2016, he was found to have relapsed with Leukemia cells showing up in his spinal fluid.  With this discovery, Riley had to begin intense chemotherapy again.  With his immune system severely compromised from the intense chemotherapy, he developed a severe fungal lung infection that nearly cost him his life.  He was placed on a vent and spent 19 days in ICU, but God is good and Riley was able to be home for Christmas in 2016.

Unable to continue with traditional chemotherapy, Riley was given an immunotherapy to fight his cancer.  Riley completed his immunotherapy treatment at the end of April and started maintenance chemotherapy on May 15, 2017.  He underwent radiation in the summer of 2017 and was able to start kindergarten in the Fall.

Sadly in March of 2018 Riley relapsed again in his spinal column.  Riley Hospital worked diligently to find a treatment that would work for Riley and we went to Cincinnati Children’s Hospital to receive Car-T therapy.  It was difficult transitioning to a new hospital, but Cincinnati Children’s took good care of us.  Riley suffered very little side effects from his first Car-T infusion and he was in remission for about a year.  But in June of 2019 at his one year follow up appointment at Cincinnati, we found that Riley’s Leukemia had again returned.

Riley received a second batch of his modified T-Cells in the summer of 2019 at Cincinnati in hopes of getting him back into remission.  This time Riley suffered neurotoxicity, ended up in the ICU, and suffered seizures.  It was a rough week or two, but soon Riley bounced back to his normal self and quickly regained function that he lost.  The Car-T only lasted about 5 weeks before they began to dissipate.  A few desperate attempts to revive the Car-T bought another 2 months, but on the Wednesday before Thanksgiving, his leukemia returned. We headed to Seattle Children’s hospital in December to begin collection of Riley’s T-Cells for yet another round of Car-T therapy.  The entire family returned to Seattle in January to begin treatment.  In mid-February Riley suffered severe neurotoxicity with brain edema, seizures, and permanent brain damage from this more potent form of Car-T. 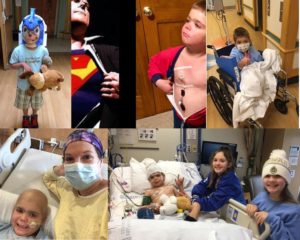 Late in the night on February 13th of 2020 we were told to say our goodbyes to our sweet Riley as he was not expected to last through the night.  Throughout that gut wrenching night we prayed, paced, and held on to hope as the doctors and nurses fought for hours to keep Riley with us.  By 8 am on February 14th there was a glimmer of hope as Riley’s vitals had stabilized.  This marked a very long slow process to bring him back to us.  We were asked to make decisions in that 24 hour time period that would forever affect his life.  Ultimately we made the right decisions, but our outcome could easily have been so much different.  He was placed in a coma to give his brain time to heal.  Over the next weeks, we tried several times to lift the coma only to have seizure activity or signs of swelling force him back into deep sedation.  Once his brain had calmed down and sedation meds were lifted, Riley was only able to wiggle his fingers and toes.  Again he had to learn to do everything again: breath, talk, eat, go to the bathroom, sit up, walk, and write…the list goes on and on.  With an intense 2 week inpatient rehabilitation stay at Seattle Children’s, Riley was able to walk out of the hospital with a walker and only minor processing and recall  brain delays on March 13, 2020.  Amid all the Covid-19 scares we were fortunate to secure a private plane back to Indiana thanks to Forrest Lucas and Lucas Oil.  This allowed us to return to our home oncology team at Riley Children’s Hospital.

It was at Riley Hospital that we learned Riley’s Car-T cells were dissipating once again.  Without these cells to keep Riley protected from leukemia, we were left with the decision to go forward with transplant while he was still in remission or wait and see if his cancer would return.  With Riley’s history of relapse, and knowing that we may not be able to get him back in remission, we chose to move forward with a Stem Cell Transplant.  Riley received his 13 year old sister’s stem cells on May 1st 2020.  Riley spent a couple of months in the hospital dealing with all the side effects of the preparatory chemo and the transplant itself.  Riley and his mom then spent an additional 60 days at the Ronald McDonald House to be close to the hospital for clinic appointments, physical therapy, and occupational therapy.  The support at Riley Hospital from all the staff, doctors, nurses, PCA’s, PT’s, OT’s,  maintenance, and cleaning crews is amazing and the love of children shows in all they do.  At Riley Hospital you are more than your diagnosis.  You are a family with dreams, determination, and a future!

Riley is currently past day plus 120 from his transplant and is doing very well.  He has started online learning in 3rd grade and we are weaning him from medications used during transplant.  He has also been able to wean off several pulmonary medications that he has been on since he was first diagnosed.  This is especially significant since the bone marrow transplant was aimed at his leukemia and has had the added bonus of addressing some of his underlying immune deficiency issues.  We are looking forward to see what the year holds for us with a child that may be healthier than he has ever been, but we will forever look over our shoulder at all the obstacles we have had to maneuver to get to where we are.

Riley’s dad, Trent, is an Environmental Division Manager at Crane Naval Base and mom, Karrie, is currently a stay at home mom to help manage Riley’s medical issues and at home learning.  Riley’s has two sisters – Molly is in 8th grade and enjoys cheerleading, gymnastics and 4-H, and Sophie is in 6th grade and enjoys art, horse riding, and 4-H.  Riley is in 3rd grade and enjoys video games, art, and family time.  As a family they love to spend time together around a campfire, playing games, going out to eat and watching movies.

“We have had wonderful experiences with A Kid Again!  Thank you for providing fun family activities for the whole family.  Sometimes we are so stressed and need a break to do something fun, but adding the stress of planning and paying for an adventure is too much for a family like ours. It is so important for the patient and the rest of the family!”

Riley has participated in several A Kid Again activities – enjoying his Adventures in a Box, strutting his costume at the Haunted Runway with the Colts, Shop with a Pacer, and even getting to say “Play Ball” at an Indians Game.  A Kid Again looks forward to having him join us for many more!