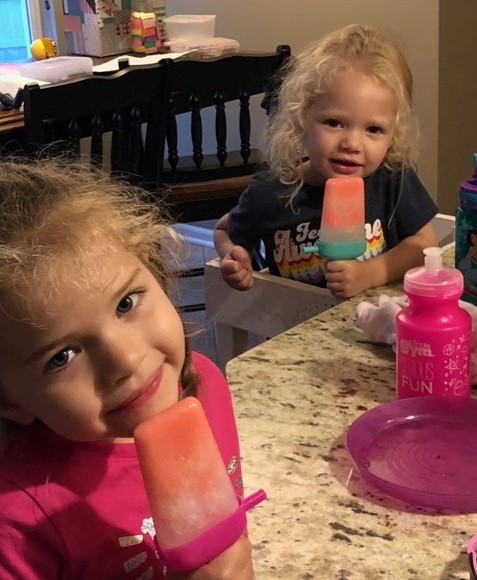 Six months after her second birthday, Marley’s doctor discovered a mass in her abdomen that led to a diagnosis of Stage III Ganglioneuroblastoma, a difficult to diagnose cancer accompanied by a tumor consisting of both neuroblasts and ganglion cells.

Four rounds of chemotherapy over the next three months resulted in enough change in the consistency of the tumor that Marley was able to prepare for a very big operation for a little girl. During the 10-hour procedure, surgeons were able to remove the entirety of the tumor.

During Marley’s last set of scans, her doctors noticed a spot that hadn’t been identified in previous scans, but hadn’t grown and was surgically removable. Because of the high rates of relapse associated with Neuroblastoma, Marley’s parents, Lindsay and Toby, decided to explore their options to lower Marley’s risk of recurrence. They connected with Memorial Sloan Kettering Cancer Center in New York, and worked with them to develop a treatment program that meant several more rounds of therapies and hospital stays.

Just before beginning the chemotherapy that Marley would receive as part of her additional treatment, her family welcomed her baby sister Delaney. The family spent a month at home with their newest addition before everyone was back in the hospital to continue Marley’s chemotherapy, followed by targeted proton radiation therapy and immunotherapy.

The last stage of Marley’s front line treatment was perhaps the most intense and difficult stage: immunotherapy. The goal of immunotherapy for ganglioneuroblastoma is to teach the body how to fight off cancer on it’s own. It does this by stimulating nerve receptors throughout the body; a process that caused immense pain for Marley, leading to her being bed-ridden for the duration of active treatment.

Lindsay recalls during one of the four-day series of 20 daily hours of treatment, she counted 13 different wires and IVs connecting Marley to monitors and medicines, one of which was a morphine drip to help with the pain.

Once she completed immunotherapy, Marley qualified for and started a neuroblastoma vaccine trial at Memorial Sloan Kettering Hospital in New York. The administration of the vaccine was a quicker process than most of her other treatments, but the pain it caused made it impossible for Marley to be mobile for an hour after each of the seven treatments, all of which required her to make the trip from her home in Indiana to NYC.

Throughout this journey, from discovery and diagnoses through surgery and multiple rounds of invasive and complicated treatments, Marley and her family have managed to find windows of hope and opportunity. This process inspired Marley’s family to support and give back to the organizations that helped them in the hardest parts of their journey.

The chance to read books and play with toys during hospitalizations was the closest Marley got to normal childhood during extended treatment stays. The family organized an annual fundraiser to fill the play rooms on the cancer floor at Riley Children’s Hospital. Every year, Marley handpicks (with a little help) toys that she thinks might make other children’s stays at Riley a little better. Her family has also organized fundraisers for Make A Wish and St. Baldrick’s Foundation.

“Marley has always been so stinkin’ positive.  She just wants to be a normal kid – she wants to play!”

Lindsay learned about A Kid Again from the Child Life Specialist at IU North the summer of 2019. Since, Marley and Delaney have joined in on several Adventures, including Christmas at the Zoo and Read with the Pacers. Marley has been on the field at Lucas Oil Stadium with Jacoby Brissett’s “Marley’s March” cleats, and in the bakery with Gwendolyn Rogers of the Cake Bake Shop, who has adopted Marley’s wish to go to Aulani, a Disney Resort in Hawaii.

“Childhood cancer sucks, but thanks to great organizations like A Kid Again we make it as best as we can”, Lindsay says. “She gets to be around other kids that are just like her, and it’s wondering to have opportunities for our family to do things we wouldn’t be able to do otherwise.”

Marley has officially been NED (No Evidence of Disease) since January 2018 and finished with the vaccine trial in New York in December of 2019. To learn more about Marley’s story, follow her Facebook page at Facebook.com/MarleysMarch! 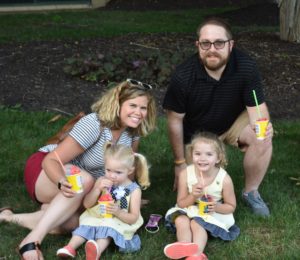