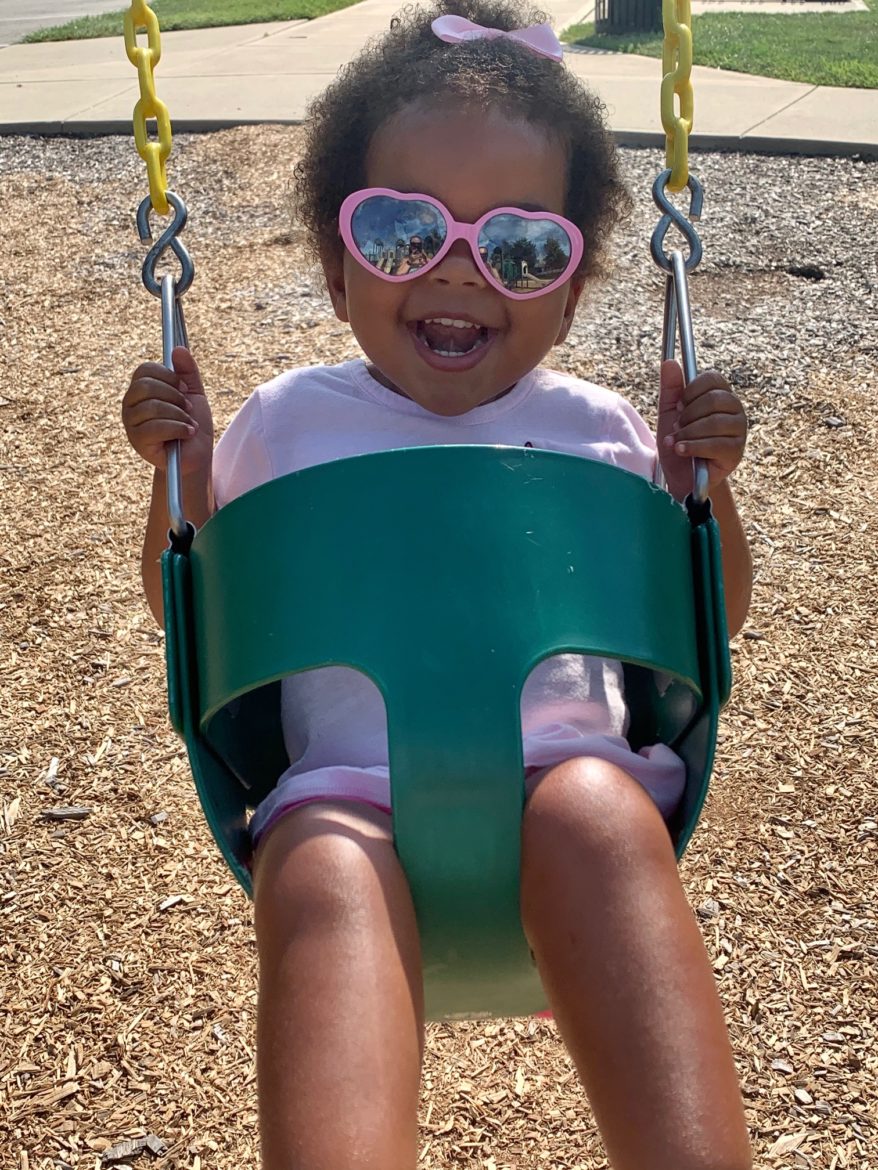 Four-year-old Mila loves all things girly, including princesses and Barbie dolls. But this little princess did not have a fairytale start to her life: Mila was not supposed to grow old enough to start kindergarten.

When Mila was nine months old, she was diagnosed with spinal muscular atrophy type 2 (SMA2), a genetic neuromuscular disorder that affects her nervous system and all the muscles in her body. “Their muscles just start to get weaker and weaker and deteriorate over time,” Holly, Mila’s mom, says. “First they don’t meet gross motor milestones, and then it gets harder to eat, and then it gets harder to breathe.”

SMA is the number one genetic cause of infant mortality. Historically, the lifespan for those with SMA type 1 is less than two years. Because Mila is type 2, she progressed normally—she learned to sit up, she learned to roll—until the eight-month mark.

“Little by little she started to lose leg function,” says Holly. “You don’t notice it because it’s literally inches by day, and then all the sudden it’s like, ‘Oh, she’s not moving her feet,’ or ‘She’s not kicking.’” 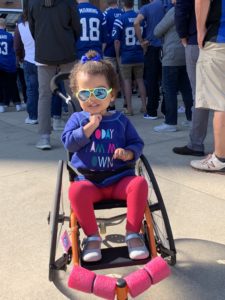 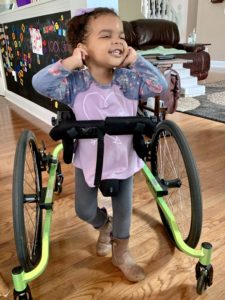 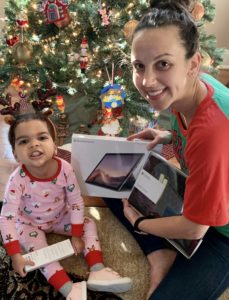 It took Holly a month to get anyone to listen to her belief that something was wrong with Mila. After one neurologist dismissed Mila with a clean bill of health, Holly insisted her doctor refer her to someone else. Mila saw a doctor at Riley Hospital for Children who suggested they admit Mila to get answers quicker. The next afternoon, they had diagnosed her with SMA2.

At that time, Holly was told a brand new FDA-approved SMA drug was not available to Mila because she was type 2. It would take months for her to get it. However, there was a new gene therapy drug in the pipeline, ZOLGENSMA, and the day Mila was diagnosed, a new clinical trial started in Columbus, Ohio.

“I called everyone under the sun to get her in,” Holly says. “I would say we were weeks from a G-tube. By the time she received treatment, she wasn’t moving from her waist down and her respiratory system was getting noticeably weaker.” But in March 2018, Mila was the third child to receive the gene therapy drug, which went into her body to synthetically replace the gene she is missing. The hope was that it would slow down the progression of her SMA. The results were astounding: the progression stopped and Mila slowly improved.

The clinical trial lasted one year, and in March 2019, Holly was back to researching ways to help Mila. She found another drug, Risdiplam, with a clinical trial in New York City. This one was an oral medication taken daily. Mila started this in combination with her gene therapy in November 2019. “She’s very much a lab rat in science, which is wild, but she’s slowly but surely improving,” Holly says.

Mila is in a wheelchair primarily, and has walkers, standers, braces, and a “jungle gym,” or 10×10 system that she suspends from in her room so that she can walk around. She participates in aquatherapy and hippotherapy. In January 2021, Mila had bilateral hip surgery on both hips. But Holly says she is a trooper through it all: Mila was back in the pool two and a half weeks after surgery and standing in her stander three weeks after surgery. 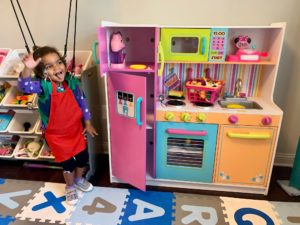 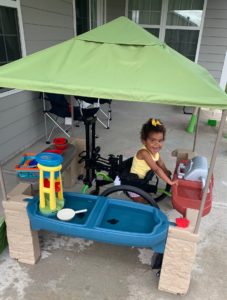 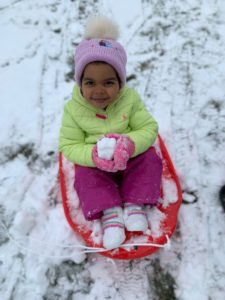 One of Holly’s biggest challenges is figuring out how to give Mila environments that are inclusive. She built a large, flat back patio so that Mila can play with the neighborhood kids in her wheelchair. Holly wants to teach kids to play with Mila, but also teach Mila to be an advocate for herself. “She’s becoming more aware of her boundaries,” Holly says, “so getting her to speak up and say what she needs and tell kids not to touch her wheelchair when she doesn’t want them to.” The challenges have shifted from keeping Mila alive to giving her a successful, functioning childhood, full of peer interaction.

“It’s definitely changed me as a person quite a bit,” Holly says. “For me, it was getting out of my comfort zone and fighting for her every day, giving her my best and giving her the best resources I could find.”

Caring for Mila is a full-time job, but Holly also has a pretty demanding full-time job as an actuary. She credits support from her parents, her work, and Mila’s nurse with making the whole process easier. “I hear all the time, ‘How do you do it?” Holly says. “I wouldn’t want anyone else in the world to have Mila, so that’s how I do it.”

Mila and Holly found A Kid Again at a local Muscular Dystrophy Family Foundation (MDFF) expo in 2019. The A Kid Again booth had a book with a princess Adventure open and Mila wheeled herself right over to learn more. Her first Adventure was at the Microsoft store for a coding camp with the Colts. Mila was given a Surface opened to a paint app. “She was in heaven,” Holly says. By the end, Mila’s Grammy had bought her a Surface for Christmas, which is still in use and now covered in princess stickers.

Mila and Holly also participated in the Christmas at the zoo, the Holiday Party at Conner Prairie, Adventures in a Box, and most recently, some bowling fun. Holly credits A Kid Again with helping her push her boundaries for Mila. “It’s very easy to get into a place with Mila, especially during Covid, where I’m going to keep her in a bubble and keep her safe, not let her out of this comfort zone,” Holly says.

“So having a group of people who say, ‘No, we are going to make it extremely safe for you to do this fun thing,’ you lean on that and trust it, and I’ve done it, which has been great for her.” 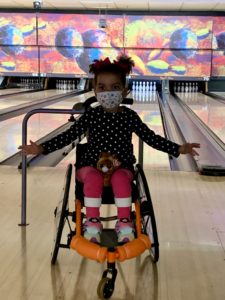 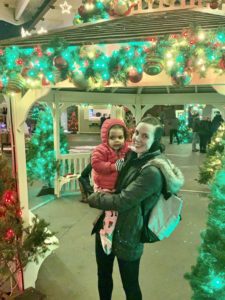 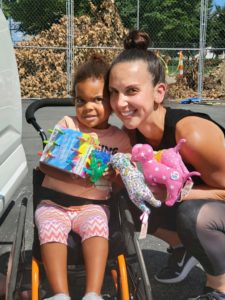