Before COVID was a thing, Marni and her family – husband John; stepson Luc, 18; son Maxwell, 3 – were already isolating.

“We were quarantining before it was cool,” she says. “We had masks in our house before anyone needed to go buy masks.”

They had to: Max, who has Down syndrome, was born with a heart defect called an unbalanced AV canal, which left him with a small left ventricle. A respiratory disease like COVID could kill him.

At 2 weeks old, Max had his first surgery to reduce pressure on his lungs that would result from the hole in his heart. Since then, he’s had two other surgeries to reroute his blood flow, and he may be a candidate for an operation called a biventricular repair, which involves creating two functioning ventricles in a single procedure.

Boston Children’s Hospital, where the surgery would be done, describes the procedure as “converting a patient’s heart that has been treated with single ventricle palliation to a heart with two pumping ventricles.”

“It’s the one surgery that could save him and give him a much fuller, longer life,” Marni says.

Max faces daily challenges – his oxygen level is 80 (out of 100) on a good day. While his peers are walking and jumping around, Max still scoots. Plus, he has all the added challenges – doctor’s appointments, regular testing – that comes with being a heart patient.

When Max was a baby, a charge nurse at Riley Hospital for Children in Indianapolis told Marni, “We want your family to be comfortable here because you’re going to be here a lot.” He hasn’t been, she says, although he was hospitalized overnight in August for a gastrointestinal bug. (Max also has been diagnosed with Hirschsprung’s disease, which affects the colon and causes problems with passing stool.)

Marni says she and John, a Methodist pastor, do their best to keep Max healthy while allowing him to be a kid. Max loves dancing. He’s obsessed with Bruno Mars, dances to Disney videos and songs, and goes to developmental preschool. He’s friendly and likes being around people.

So when Marni was at a Down Syndrome Indiana event and saw the table for A Kid Again, she was especially happy to have opportunities for Max as well as for Luc, who has autism.

“Certain activities, given our current medical bills and such, those are cost-prohibitive for four of us,” she says. “It was so cool to be able to go and be part of something with other families.”

They’ve signed up to attend the Indiana University football game on Sept. 17 and hope to get to other events.

“People say you can’t keep him in a bubble,” Marni says. “We know we can’t, but sometimes the risk isn’t worth it.” She asks that others who encounter families like hers “give them the respect of making their decisions and understand that the path is different for every kid.” 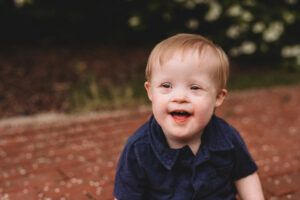