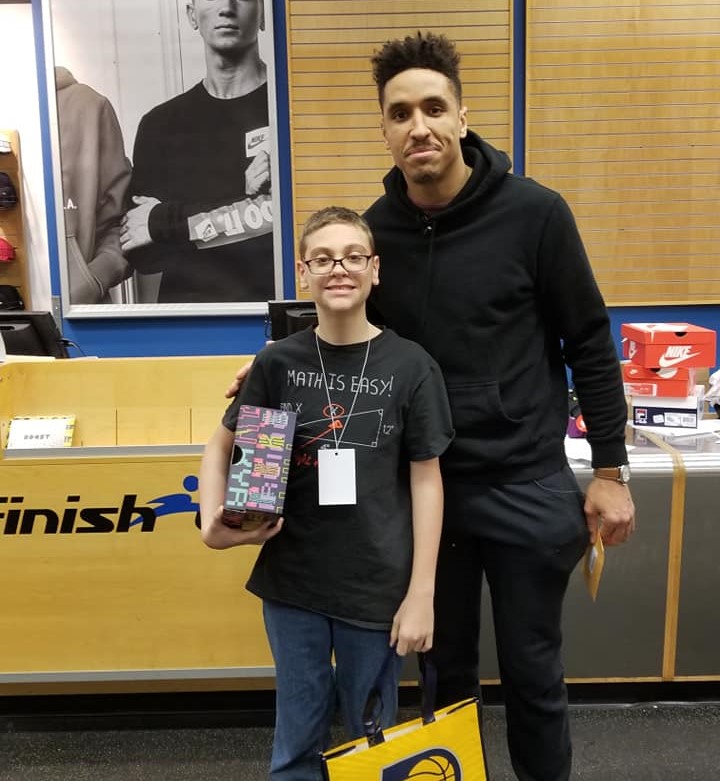 Malcolm Brogdon earned his share of fans when he played for the Indiana Pacers – none more enthusiastic than 15-year-old Gavin.

They met at a Shopping with the Pacers event put on by A Kid Again. Gavin’s grandmother and guardian, Toni, tells the story: When Gavin was 7, she says, he was beaten up on the school bus by another 7-year-old and missed a couple of months of school. When he returned, it was for two hours a day, gradually building to four. The next year, he had to repeat second grade. One result: Gavin was shy around others and didn’t go anywhere Toni or her husband, Tom, didn’t go.

Fast-forward a few years. Gavin is attending the event where participants got to shop with a member of the Pacers. Gavin didn’t want to leave his grandparents, but “I don’t know what Malcolm Brogdon did or said, but he and Gavin kind of clicked,” Toni says. “And by the end of shopping, he and Gavin were the best of buds.” They created a special handshake. Brogdon helped Gavin pick out shoes.

The next year, Brogdon’s representative remembered Gavin and sent him a gaming console so he could play Fortnite.

“That was the nicest thing,” Toni says, adding that it was totally unexpected. “To hear Gavin tell the story, he and Malcolm are the very best of friends. Malcolm got him out of his shell.” 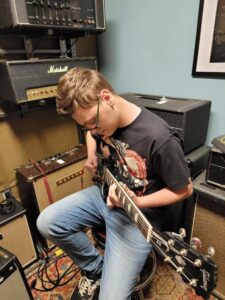 She says Gavin is funny, he’s smart and anything he wants to learn he learns it inside and out. He loves his teenage sister, Grace, who he calls “Gracie.” He’s a good friend. He has a good heart.

“Those are the things I see,” she says, “not the 13 specialists that we’re always at.”

Gavin sees those specialists for diseases that include polycystic kidney disease, Tourette syndrome, autism and severe sleep apnea. He was first diagnosed at age 1 with failure to thrive and was given a feeding tube. Toni says trying to juggle his doctors’ visits with her job and day to day life can be a challenge, “but I’m very blessed that I’m able to work around his appointments.”

Toni says Gavin picks up interests, masters them and then moves on. He wanted a yellow belt in karate and earned one. He wanted to be able to solve a Rubik’s cube and got to the point – before stopping – that he could do it in 30 seconds. Last November, he started teaching himself electric guitar and loves to play ’70s rock, particularly Black Sabbath’s song “War Pigs.”

“He is phenomenal at it,” she says. “I have never seen someone so new that can play so well.”

After Gavin started teaching himself the guitar, Toni and Tom signed him up for lessons. “His teacher texted me today and said Gavin is easily one of his best students of all time,” Toni says.

“We struggle a lot,” she adds, “with people not getting it because he’s not in a wheelchair. And I know people mean well, but I hate it when they say, ‘You’re so wonderful that you can do this. I don’t know if I could raise a child with so many health issues.’ Yes, you can. If that’s your child, you would.”

Yes, she says, she wishes Gavin were fully healthy and a star athlete. But she loves him as he is.