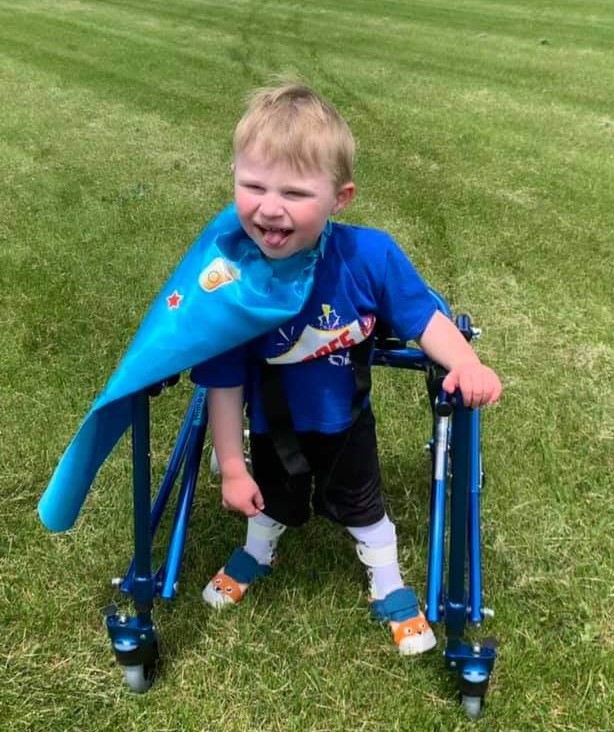 Three-year-old Brantley is obsessed with water. He loves swimming and baths so much, in fact, that his mom, Sarah, says Brantley would be perfectly happy living in the bathtub. He also laughs a lot, sometimes out of nowhere. While this all points to one happy little boy, it also points to the fact that Brantley has Angelman syndrome.

Sarah’s pregnancy with Brantley was full of confusing results. At her 20-week pregnancy appointment, a specialist told Sarah and her husband Jonathan that part of Brantley’s brain, the cerebellum, was developmentally three weeks behind. The doctor recommended that Sarah and Jonathan terminate the pregnancy because brain development does not usually catch up and often gets further behind. Sarah and Jonathan were determined to keep their baby, and at a checkup two months later, the same doctor informed them that Brantley’s brain development was back on track!

From there on out, it was scary news one appointment after the next: his eyes were too far apart, he was gaining too much weight, he had too much amniotic fluid. “We just didn’t know what to expect with this child because there were so many complications throughout the pregnancy,” says Sarah. When Sarah had been pregnant with Brantley’s older brother, Gavin, everything had gone smoothly, so all the problems threw them off. 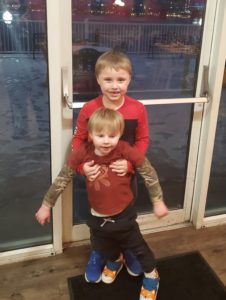 But when Brantley was born, he looked like a normal baby boy. It was not until Brantley was two months old that Jonathan and Sarah felt something might be wrong. He had trouble making eye contact, squirmed a lot, waved his arms, and had trouble sleeping. At his six-month checkup, his doctor saw red flags: squirming, constant laughing, no eye contact, low body tone, pale skin, small head size. And he was not meeting his milestones. They thought he might have autism.

At his one-year checkup, after seeing that Brantley was even further behind on meeting his milestones, a doctor referred Brantley to a neurologist who ordered genetic testing. Brantley was diagnosed with Angelman syndrome, a disorder his family had never heard of. “We had to start from scratch and hit the ground running,” says Sarah. Because there is no cure for Angelman syndrome, the recommended treatment is therapy to help manage the symptoms. Brantley’s doctors recommended they start therapy as soon as possible.

Brantley has speech therapy, physical therapy, and occupational therapy every week. He also attends preschool two days a week and does some therapy there. Sarah and Jonathan are hoping to get Brantley started with equine therapy this year, too.

Now that Brantley is three, he is getting into more things. He loves all types of music. And he loves his brother, Gavin. While Gavin is protective of Brantley, Brantley likes to jump all over his big brother. “Brantley is little, but he is strong and mighty,” says Sarah. But the brothers have a really close bond. 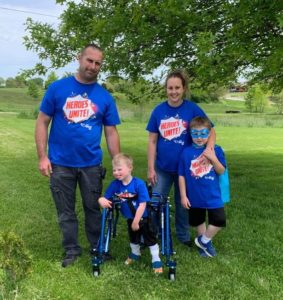 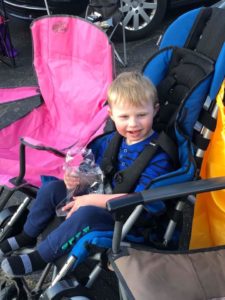 The doctor appointments have slowed down. Brantley is crawling and climbing everywhere, says “mom” and “hi” every now and then, and has been working in therapy to walk more without his walker. “He’s doing so much more already at three than we ever imagined, so it’s really amazing,” says Sarah. This is amazing considering doctors at one point said Brantley would never talk or walk. Sarah and Jonathan refused to let the bad news bring them down.

“You just don’t know what all they are capable of doing,” says Sarah. “Get with others that are in the same boat and don’t let others knock you down too much.”

It is easy to get knocked down at the beginning of a diagnosis. As Sarah and Jonathan were trying to learn more about Angelman syndrome, they found a lot of comfort through support groups. And they found comfort in A Kid Again after learning about the organization from Kristy Purlee, CEO of the Washington County Family YMCA. While the family has not gotten to experience any in-person Adventures yet, they have enjoyed the Adventures in a Box. And they appreciate the support. “There are people out there that really do care and think a lot of us and want to go the extra mile and help us out any way they can,” says Sarah.