When you talk to Aiden, he strikes you as an average 8-year-old boy. He enjoys sports and video games. His favorite school subjects include science and math. He is the baby of the family with three older sisters.

However, Aiden’s family knows how much he has gone through to get to this point. Just two years ago, they learned the hard way how quickly things change.

During fall break when Aiden was six years old, he fell. Besides getting the wind knocked out of him, he was fine. But then, a few days later, his head was swollen on one side. Aiden’s pediatrician ruled out a concussion and said he might have a headache for a few days. Yet a week and a half later, Aiden was still complaining about headaches and stomachaches. “By this point, he was just really tired. Even his school had said he doesn’t want to participate in gym, and he was in kindergarten,” Katie, Aiden’s mom, says. “Gym was one of his favorite things!”

Halloween arrived, and after about 10 minutes of trick-or-treating, he was asking to be carried. His parents noticed his skin was pale and yellow, almost like he had jaundice. The next morning, Aiden was back at the doctor’s office for blood work, an ultrasound of his liver, and a chest X-ray.

“So we went for the lab work, and we went for the chest X-ray, but we never did the ultrasound because the doctor’s office called and said to come back. And that’s when we found out,” Katie says. Aiden was diagnosed with B-cell acute lymphoblastic leukemia (ALL). 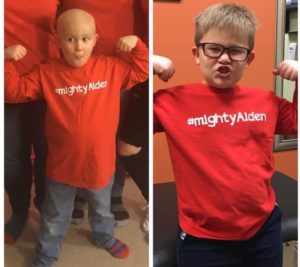 B-cell ALL is a cancer that affects the white blood cells, which are the infection fighters in our bodies. Children with B-cell ALL do not have enough normal white blood cells in their bodies and have a harder time fighting infections. Symptoms include frequent infections, easy bruising, joint and bone pain, and weakness and fatigue.

Aiden was admitted to Riley Hospital for Children. What started as four to five days of treatment turned into 10 days, as Aiden had some blood pressure and other issues. During this stay, he had several blood and platelet transfusions, and a port placed in his chest. The port allows doctors and nurses to draw blood for lab work, and to administer medicine and chemotherapy straight to his bloodstream.

When Aiden was released after 10 days, the family went back to Ft. Wayne for about two weeks, before ending up back at Riley the day before Thanksgiving. A scheduled appointment turned into a hospital stay because Aiden had developed steroid-induced Type 1 diabetes from his treatment. 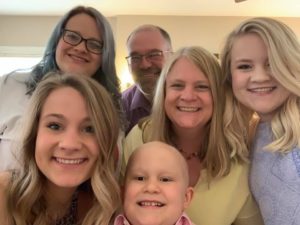 Aiden’s family remembers those first 9-10 months being full of intense chemotherapy protocols. All the treatments and medicine made for a steep learning curve for Aiden’s family. “There are things we can do and tolerate now that in the first two to three weeks, it was extremely nerve-racking,” Paul, Aiden’s dad, says.

But all these treatments have made it clear that Aiden is resilient.

“I remember when he got diagnosed with diabetes on Thanksgiving that first year,” Paul says. “There was a stretch there for two weeks that he was on insulin and we were having to put a needle in him 10 times a day, and he just said, ‘OK.’”

Even though Aiden is one tough guy, the medicine can make his legs, arms, and feet sore. It’s also given him a bit of neuropathy. He did a year of physical therapy to help with his walking and to prevent falls. “He still gets a lot of the muscle and joint pain, and just moodiness and weird sleeping and eating,” Katie says.

There is light at the end of the tunnel for Aiden’s family: Aiden is almost done with his treatments. His last lumbar puncture and Vincristine infusion were at the beginning of December, and he will take his last chemotherapy pills in early January, and possibly have his port removed around the same time.

“It seems like forever ago and I can’t believe we are at the end,” Katie says.

Aiden will officially be in remission. He will be monitored every month for the first year, then every two months or so, until he reaches the five-year mark and enters the Childhood Cancer Survivor Program at Riley Children’s Cancer Center.

Looking back, Aiden’s parents are thankful for an amazing support system.

“I’m so thankful in terms of timeframe that we weren’t starting this journey right now in isolation,” Paul says. “Thankfully, we are ending it this way, because if we wouldn’t have had all the help we had that first year, that would have made it tougher.”

They encourage others going through a similar journey to embrace offers of assistance. “When people offer to help, go ahead and take it,” Katie says. “And just really take it one day at a time.”

One offer Aiden’s family received was the chance to join A Kid Again. After hearing about the organization from Aiden’s Child Life Specialist at IU Health North Hospital, they signed up. Since joining, the family has participated in the Kings Island Adventure, Pacers games, shopping with the Pacers, the haunted runway with the Colts, and picking up the Adventures in a Box. 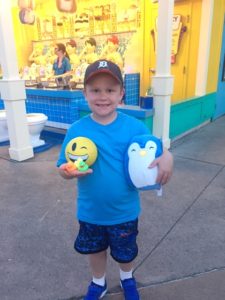 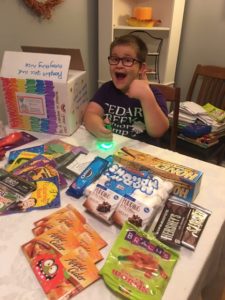 Paul even found a new favorite football player because of his experience with A Kid Again. “A big supporter, Kenny Moore II, is on the board of A Kid Again,” Paul says, “and just because of that relationship, because of his support for the organization and kids like Aiden, I’ve become a Kenny fan.”

A big perk for families dealing with medical bills, medication, medical equipment, and other costs is that A Kid Again adventures are free for the entire family. Because Katie did not return to work for the first 10 months after Aiden’s diagnosis, they couldn’t always afford to go out and do fun adventures. “Sometimes you’re so concentrated on what you’re going through, it’s nice to have someone else organizing it and we just have to show up,” Katie says. “Just a relief to have that little bit of a break.”

Aiden’s family believes in the A Kid Again mission so much that they now volunteer and are helping get things rolling in the Ft. Wayne area.  “It helps when you get to meet other families and other kids,” Katie says. “Get involved because you meet so many great people that can help you navigate.” 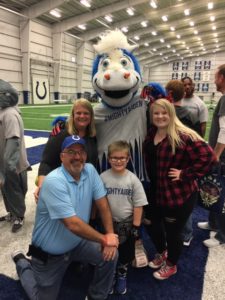 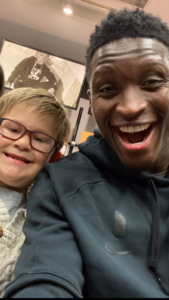