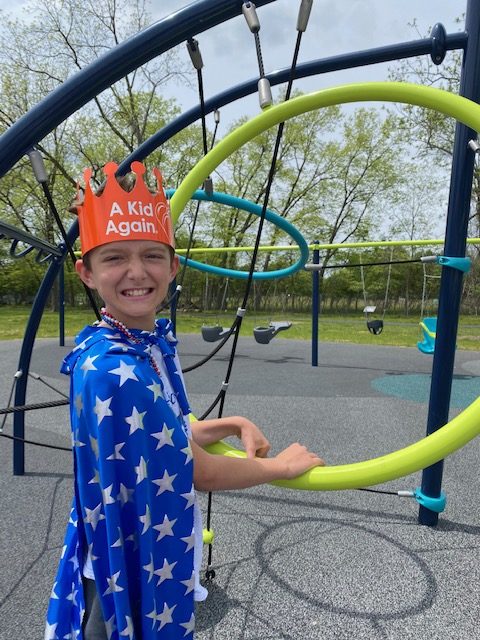 Baseball season is in full swing, and after missing the last two seasons, 10-year-old Keaton is more than ready to play ball. While the pros played a shorter season last year because of the coronavirus, Keaton missed two seasons because he was diagnosed with rhabdomyosarcoma (RMS) in March 2019.

In February of that year, when Keaton was eight, his parents Travis and Jessica noticed a swollen area on the bottom of his foot. A week and an X-ray later, they were sent to a specialist in Indianapolis who believed it was a cyst. An ultrasound revealed it was not a cyst, and an MRI was ordered. Jessica happens to be an MRI technologist and was able to perform the MRI on Keaton’s foot at her workplace right after the ultrasound. “It was a blessing,” says Jessica. “We did it right then and had the report within a day. Something that normally could take weeks, we got done in three days.” Unfortunately, those quick results led to a biopsy that revealed Keaton had stage 3 RMS. 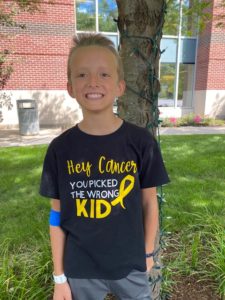 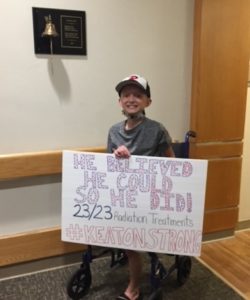 RMS is a cancer that affects muscle tissue, specifically the cells that turn into muscle. When these cells multiply out of control, they form tumors that can grow anywhere, but most often on the arms, legs, head, neck, and reproductive organs.

Keaton started his treatment plan—66 weeks of chemotherapy—that same month. He began with 42 weeks of outpatient chemo at Riley Hospital for Children, rotating through three drugs. “Depending on what drug it was, sometimes we were there a couple hours, sometimes we were there 10 hours,” says Jessica. “And there was one chemo he got where we had to go every day for a week.” His first set of scans in May, two months later, showed the tumor had shrunk to a quarter of its original size. He had surgery in June to remove the tumor as well as the entire muscle the tumor was growing in from his foot. And in August, he began radiation—23 radiation treatments mixed into his chemo routine. Because of the surgery and radiation, Keaton used a wheelchair from June to September, and there were a few small setbacks. But the intense treatment schedule seemed to pay off because that fall, Keaton was walking again.

After those 42 weeks of outpatient chemo, Keaton began 24 weeks of maintenance. This involved taking oral chemotherapy at home every day and then three times each month visiting Riley for IV chemotherapy. Three weeks after Keaton finished his treatment plan, his scans came back clear, and he was ready to ring the bell at Riley to mark the end of his treatments. When he left the hospital, his family and friends were outside to let go of balloons and celebrate with him.

Keaton has been in remission since August 2020. He continues to have scans every three months, and while they will lessen in frequency, he will continue scans for the next several years. 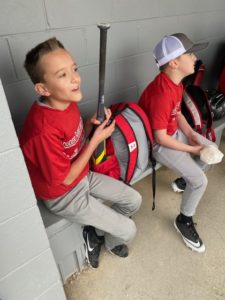 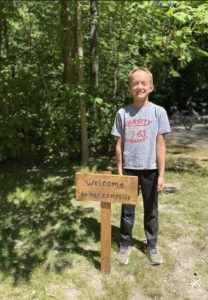 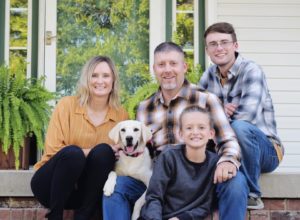 Keaton starts fifth grade for in-person classes this fall after a year of virtual school due to his weakened immune system. With baseball and school back, as well as the hair that he lost during treatment, things are starting to feel normal again. But there are still some challenges. Keaton started seeing a counselor after developing anxiety during his treatments, and he still does not always want to talk about his cancer journey. He also struggles with chemo brain—thinking and memory problems that can occur after treatment. “School has become more challenging than it was before the chemo,” says Jessica. 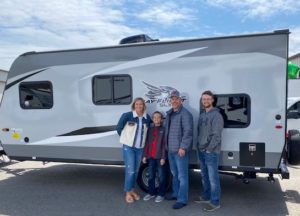 One happier result of Keaton’s cancer journey is receiving his wish from the Make-a-Wish Foundation: a camper. Keaton has enjoyed getting out to the campground with his family, where he can fish, ride his bike, and sit by the campfire. Another source of happiness has been A Kid Again. After getting connected through Riley, Keaton’s first Adventure—shopping with the Pacers at Circle Centre Mall—came at the perfect time. “He was going through treatment, and it was Christmas,” says Jessica. “When he found out he got to do that it just completely changed that whole few weeks leading up to it and then after Christmas, and our family got to be part of that.”

They attended the Conner Prairie Holiday Party this past year, participated in the virtual Capes and Crowns 5k last summer, and joined the Capes and Crowns walk at Independence Park in Greenwood this year. They have also received several Adventures in a Box.

Jessica appreciates that the Adventures do not single out the child with the illness. “Even though it is about the kid and that’s why you’re in it, it takes the focus off of that and makes it more of a family adventure,” says Jessica. “For the kids that are kind of shy, it makes them feel like it’s not necessarily all about them that day. A lot of other organizations don’t incorporate the whole family.” 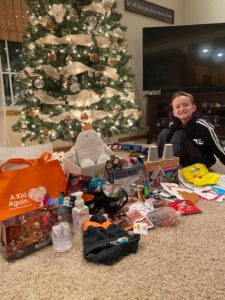 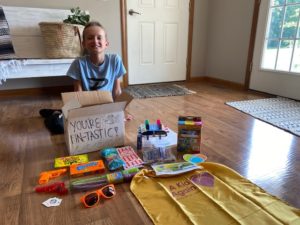 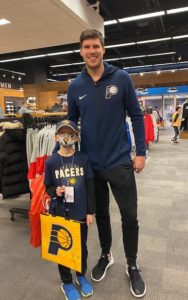